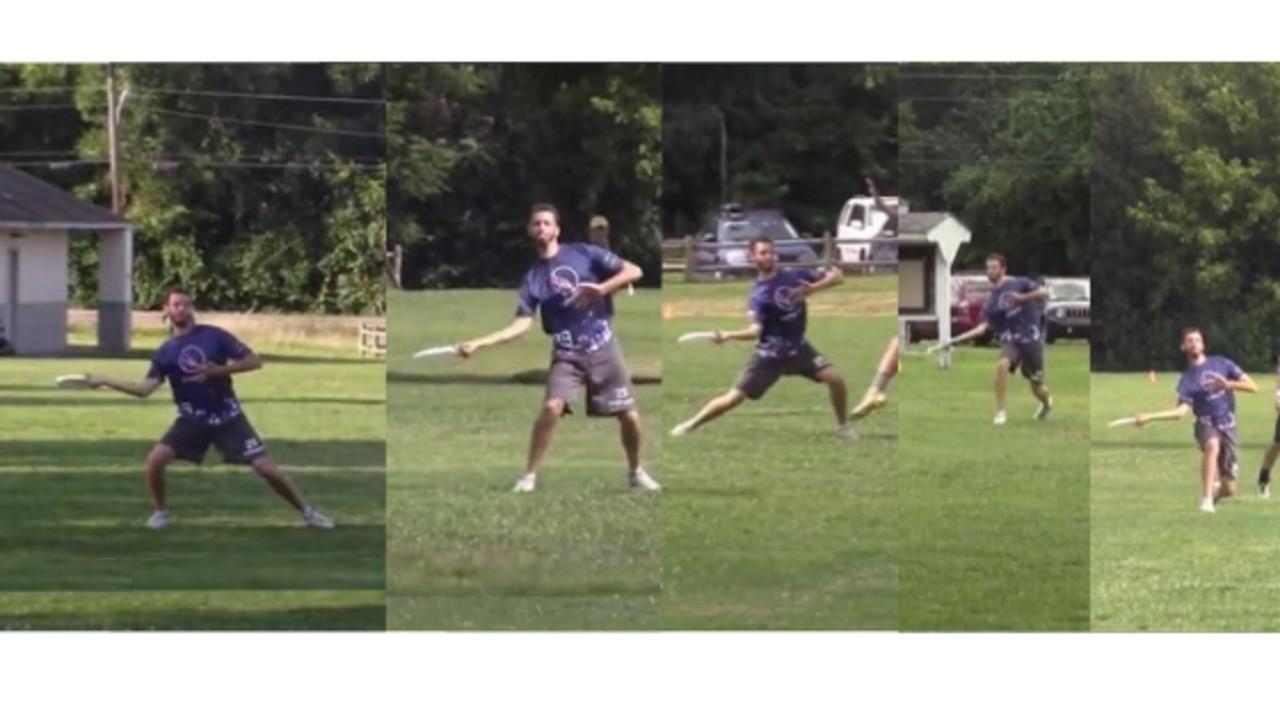 Context for this case study

Jordan Becquer has been one of our UAP Premium members this past season. His goals for the season included helping his team get to regionals and becoming a more assertive handler.

Among the coaches he worked with during the UAP program was Jenny Fey.

“We talked about being an aggressive handler and what I think limits me from doing that. Took a look at my throwing form, and what is the root cause of most of my turnovers (body position on throws losing form when trying to go fast/aggressive)”

By evaluating a series of throws, Fey is able to diagnose consistent form issues. In this case there is consistently too much arm action as shown by the amount of follow through.

Additionally by looking at throws in context, we can evaluate both the throwing form and and decision making issues.

Even if you don't have the same form issue, we hope these excerpts from their conversation will give you some ideas about your own throwing form evaluation.

For those of you interested in our UAP Premium program (opening soon!), this also gives you just a small taste of what you might get from the one on one coaching that is part of our UAP Premium plan.

Jenny: Same form issues we discussed. Your arm ends up across your body and has way too much follow through. This causes the disc to blade and not to sit flat in space, which is why your receiver can't catch up to it. I also think you are stepping forward too much here. Here's a silly video of my pal Markham Shofner teaching how to flick huck...I picked it because at 33 seconds it shows his really nice sideways step that helps him snap his hip for momentum but keep his shoulders open so the disc comes out flat.

Jenny: A completion even though it was contested, and the throw is much flatter (nice) though it hangs...hard to say whether the cutter was already too deep or maybe you're throwing into the wind? I still see the too-much-follow-through but it's a much better throw.

Jenny: The throw looks okay, but is still more outside-in loopy than ideal. A flat throw tailing more to the middle of the field would be safer for avoiding defense. And here is where your arm ends up (again.) 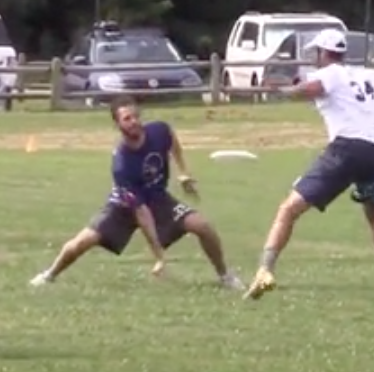 Not a Forehand! (BBQ Backhand)

Jenny: I really support this BBQ backhand! Obviously you could throw a flick here but you get this off smoothly and quickly before your mark can set. If he had sealed it, then you would need to throw flick, but as is - no complaints here!

Jenny: Yay, I'm glad this is here! This is an example of a PERFECT situation to throw the bladey outside-in that is your bread and butter. Here, the shape really helps you get around the defenders and put it only where your receiver can catch it. Nice shot! (Your arm still ends up in a bad spot though hehe. When throwing an OI like this, my arm is far from my body and up in the air, hand parallel to my ear and elbow forming a just sharp angle with my upper arm. Picture kinda shows it.) 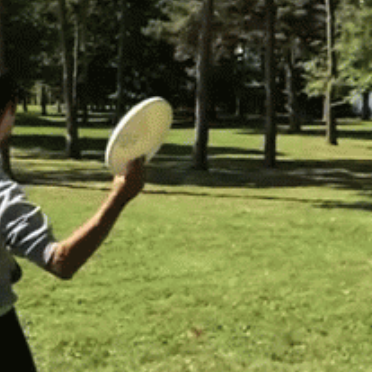 Jenny: This turnover happens because of communication with the receiver and because of where she is in relation to the throw. It's sort a line drive and she turns the wrong way so there was no chance to read the disc and react. BUT the shape is nice and flat. If she had started more in the middle of the field and cut toward the sideline (so the reverse of the shape her cut took) this throw might be perfect. But again, your arm FLINGS past your body in order to get the momentum. You are clearly using that follow through to get power, but the torque needs to come from your step and the snap of your hip/elbow more. Like Markham!

Jenny: One of the stronger throw shapes and examples of form in the set. I like how you use the step for momentum/power (unlike Clip 6), but the arm issue remains. I am also trying to figure out why it goes so HIGH (which is why it becomes a contested catch) and I'm honestly not sure. It looks like the right shape when it leaves your hand, but it must be angled a little too sharply upward, because it really soars. I thought it was going to be inside out and then it ends up outside in (as all of these are!!) so I'm not 100% clear on this one.

End of the Story

Jordan was putting in work on his throws and decision making to help his team get to Regionals for the first time. Incredibly, he ended up throwing the game winning score on universe point in the game to go!

I asked him if he thought Jenny Fey would be proud of that throw.  “Yes, yes I think she would."

Assertive handling for the win!

Even if you don't have exactly the same throwing form issues as what Jordan is working on, I hope you've learned something that you can apply to your own game.

Here are some suggestions:

Want Your Own Evaluation?

Sign up here to join the wait list for our UAP Premium program which will open next week. When we open, only 20 spots will be available. Be sure you don't miss it!